I can’t really avoid the c word this week. These past few days have gone by in a whirl and we are all coming terms with profound changes to our lives. The discipline of spending a little time to write about the garden is finding a new level of meaning and spring has arrived so it is all the more enjoyable. It it so good to focus on the new life that is appearing and the joy that comes with seeing the perennials push through again.  Here are my six delights for this week.

There have been some cold nights and cold windy days this week but the sun has some warmth and the garden is responding.  I’ve seen the tulips in bud and this week the Thalia opened up.  Must have more of them was my response.

I know everyone has done daffs over the last few weeks but I’m going to tip my hat again to Tete a Tete.  When I planted this ring of them around the persimmon tree I thought there was a stronger danger of it looking a little twee.  Maybe it does but seeing this cheerful ring of them every morning makes my day.  I’ve gone for over-egging the pudding and have also planted an inner ring of snowdrops.  I can’t wait!

It feels a little early to be cutting back the hydrangeas but the new growth is coming through strongly now.  I am going to resist for as long as I can.  April can be cruel.  The penstemons are also sending out new growth but they aren’t going to tempt into a cut back just yet.

The new growth on the roses has this lovely reddish colour.  In admiring this exuberance I also noticed that some tying in was needed, which was duly done.  It is at this time of year I realise that I could have been more ruthless with some of the climbing roses.  Some people never learn.

More new growth coming from the weigela florida ‘Variegata’.  I bought it new for this garden so it is about three years old now.  I’m happy to let it have it’s natural height but I think I may need to contain the spread.  I’m looking forward to May when it’s pink flowers appear.

I anticipate a sudden influx of bees as the rosemary comes into flower.  Yes, indeed gardening and all its side benefits will be keeping my soul healthy this year.

Thanks to The Propagator for his admirable work in keeping Six on Saturday together.  I shall be sowing seeds this weekend, definitely some cosmos, perhaps some zinnias and probably some tellima grandiflora and the grass needs cutting.  Enjoy your gardening jobs, take time to appreciate what’s growing now and celebrate Springtime,  for it is officially here!

There is so much gloom around at the moment, I need the garden to pick me up.  It is trying very hard, many things are on the edge of flowering, the perennials are forcing their way up through the mulch and the birds are singing.  I have much to do so the mojo just has to get going.  This was how I started out yesterday but an energising night out in Shoreditch – yes I know, too old for all that really! – has got me going again.  The potatoes are chitted and ready to go.  This is the number one job for the weekend.  If I do nothing else, this will be done!  Here’s what is happening in the garden without my help. 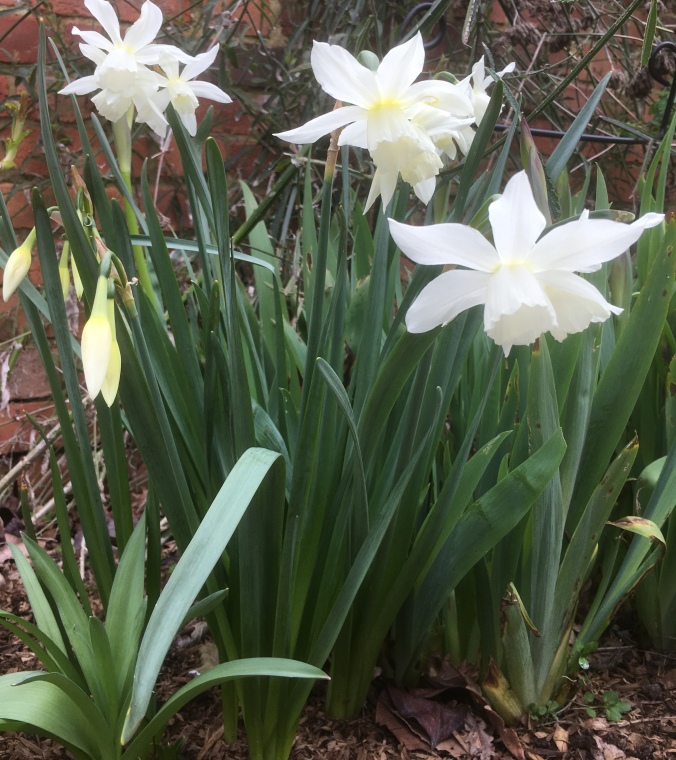 The Thalia are just opening out on the south side.  Those in the north facing border are about a week behind.

The fritillaries  have joined the throng.  I did mean to plant more of these but I had such fun trying to squeeze in extra tulips that I just didn’t get round to it.  On to the list that goes.

My primrose border is filling out very nicely and I planted some anemone blanda ‘white splendour’  in amongst them.  Just at the bottom right are the shoots of some white phlox warming up for later in the year. 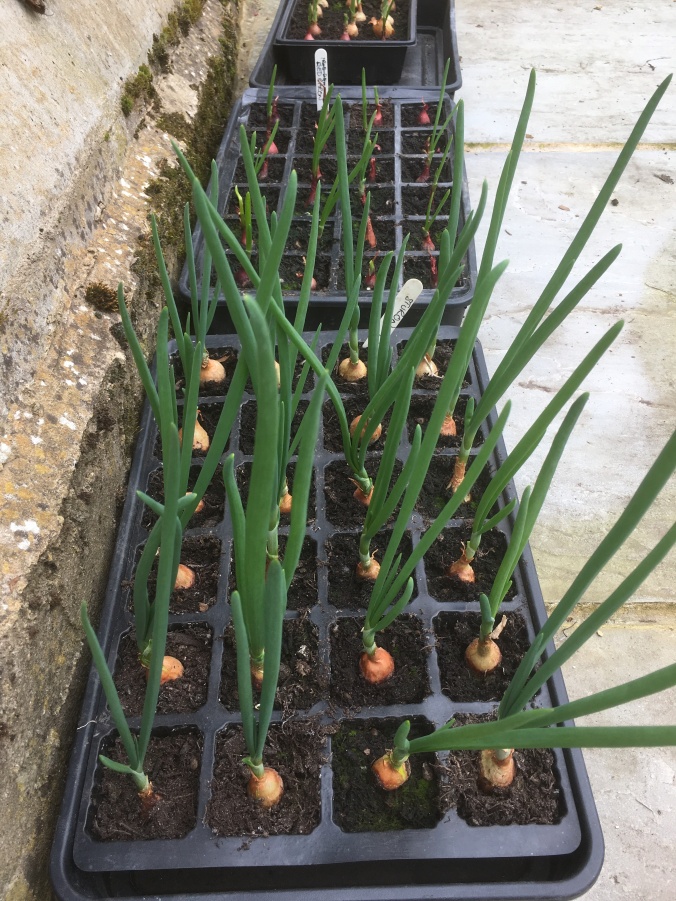 The onions started off in modules are going in the ground this weekend. The red ones have been slower to get going.  Not sure why! They have been coming in and out of the greenhouse all week so should be well acclimatised.   There are a few self sown cornflowers making themselves at home in the space allocated for onions.  It seems a shame to move them on.  Maybe they can grow companionably side by side?

Pulmonaria ‘Sissinghurst White’.  I have nurtured this plant for three years.  It wasn’t doing very well in the first planting spot and so last year I moved it to a slightly shadier space.  It is still very small but I think I have to give more time in it’s new home before I uproot it again.

The north border of the garden is the focus of attention this year.  There are two choisyas there which I have left alone until now, but the time for action has arrived.   One of them is poorly.   One side is yellowing whilst the other looks green and glossy.  The plant has been hacked about in the past, with evidence of limbs having been cut off.  As there is a very happy choisya not too far away I am not too sorry to say that this one is getting it’s marching orders.  I could just cut off the yellow side and see what happens but no, decision made.  Out with the old and in with something new.

I’ve also managed to throw out the new block editor and go back to the old classic editor.  Yipee! More reasons to be cheerful.  I hope you are feeling cheerful in your garden this weekend.  Don’t forget to see what fellow sixers are up to, go to  The Propagator for all the links.