The first temptation has been resisted.  Having spent last weekend removing slugs from the border, it put me in mind of the children’s song about worms ‘Big fat juicy ones, Tiny little squiggly ones’ and I was tempted to post six varieties of slugs.  But we’ve all had enough of them haven’t we?

I was also tempted to post six geraniums or six roses.  I think I’ve also bought at least six new plants in the last month – temptations not resisted.  I decided to mix it up: 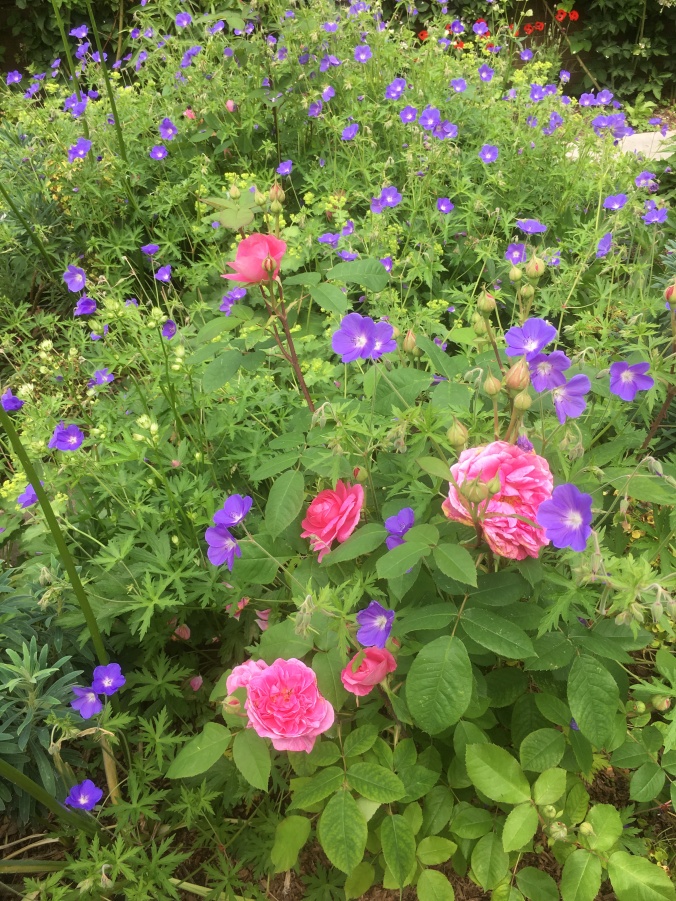 A rose and geranium combination in recognition of the arrival of June.  The rose is Gertrude Jekyll, so beautifully scented.  It really does fill the air with perfume.  The geranium is Brookside.  This is definitely asserting itself this year, the long stems thread round the other planting giving height to the border.  The RHS say stems are reasonably short at 50 cms but I would say medium height.

A rose and lavender combination and one of the new plants bought.  The rose is Natasha Richardson, opening pink and fading to a pale pink.  I was wondering what to underplant it with and eventually realised that the French Lavender living next door looked a good combination so I bought one more to plant towards the front. 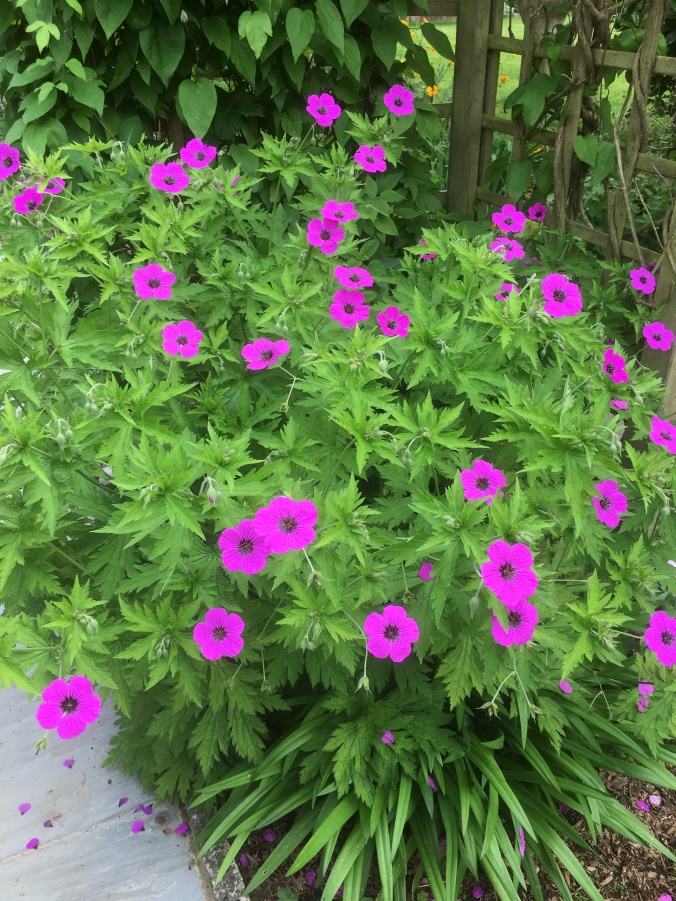 A geranium on its own.  The eye popping Geranium psilostomen, also in its second year and achieving an impressive height.  It is pretty much self supporting although I have put a hoop in on the path side to keep it in its place.

Another new plant: Salvia Armistad.  Featured more for the slug damage to the lower leaves.  I did wonder if this will survive a winter in my clay soil but decided to try it out.  On second thoughts it might not survive the summer if the slugs keep munching it.  I am going to try nematodes.

Last year I extended my collection of Astrantias.  I added Roma to the border.  It’s not come through as pink as I was expecting but I will give it time to settle.  It’s subtlety might be what the border needs.  I’ve already decided the geum in the back needs to be moved. Pink and yellow is not my favourite combination. 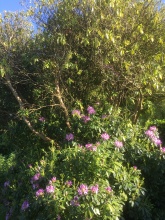 I can’t resist the temptation to revisit one of last week’s six.  I must say thank you to  Jim Stephens  John Kingdom and Tony Tomeo  who gave me advice on the two tier rhododendron.  With their help I’ve discovered that my ancient plant is the invasive, common R. ponticum.  I’ve been up the ladder to take a photo of the the top tier which is now in flower and I think the top and bottom are the same, that is, it is not a more rarefied rhoddie grafted on to the ponticum root stock. It’s quite a monster and dominates that side of the garden so it does need to be tamed a little.  I think I’ll be getting help with that one.  The first photo is the bottom flower, the second the top tier flower, the third the whole tree and the fourth the tree as is looked last week.

Each new Six On Saturday post brings new temptations, this week a rose on  Thomas Stone’s blog  has caught my eye.  On the list for the autumn temptations!  Be tempted at The Propagator’s blog where you’ll find links to all the Sixes.