On the whole it was a gloomy, wet and windy week here but a little milder than of late. It was with some trepidation that I ventured out into the garden to collect this week’s six but gardens have a great way of taking care of themselves and providing a few surprises. 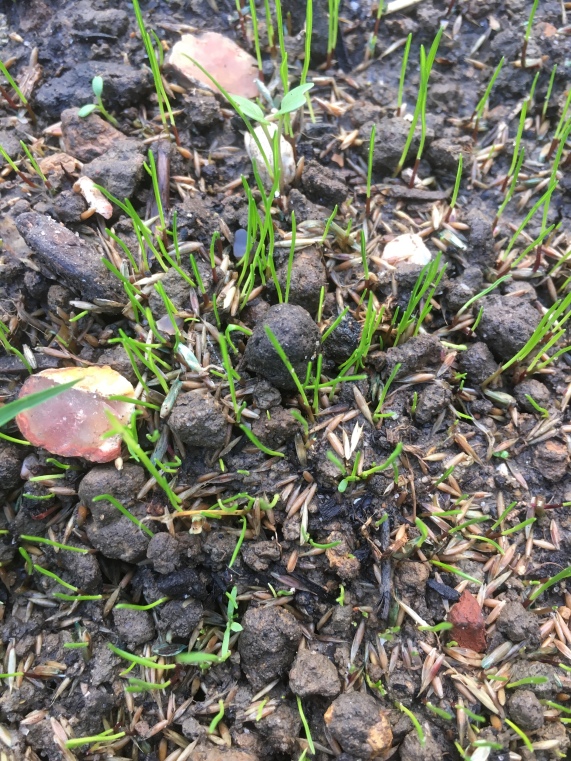 One of the major projects of this year was the laying of the garden path.  It was laid on top of the old path which worked well in most places but as the path rounded the corner to meet up with the lawn the height differential came into play.  The weather was so hot and dry that plans to build up the lawn height were put on hold until about a month  ago.  Part of the lawn was stripped off and the soil level was built up.  My lawn is a patchwork quilt of grass, creeping buttercups, wild yarrow, clover, daisies and much more.  The stripped off turves did not hold together and when re-laid there were several scrappy patches which needed seeding.  I had given up hope of the new seed germinating but I really was very excited to see that the first new shoots have appeared. 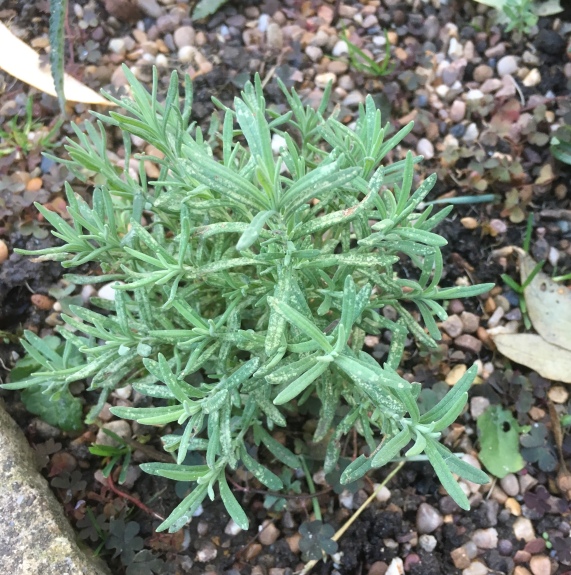 This new growth reminded me of one or two other things in the garden that had sorted themselves out.  Last winter I lost a French lavender plant given to me as a house warming present.  It had done so well over its first summer but winter was just too much for it.  Or so I thought.  A few weeks ago I noticed new shoots of lavender appearing alongside the English lavender I had planted in its place.  This is the strongest of the bunch and I’m hoping that sheltered by the English lavender it might make it through this winter.  There are a couple of smaller seedlings that I am going to lift and overwinter in the greenhouse.  I would love to report back to the giver that I do still have the French lavender. 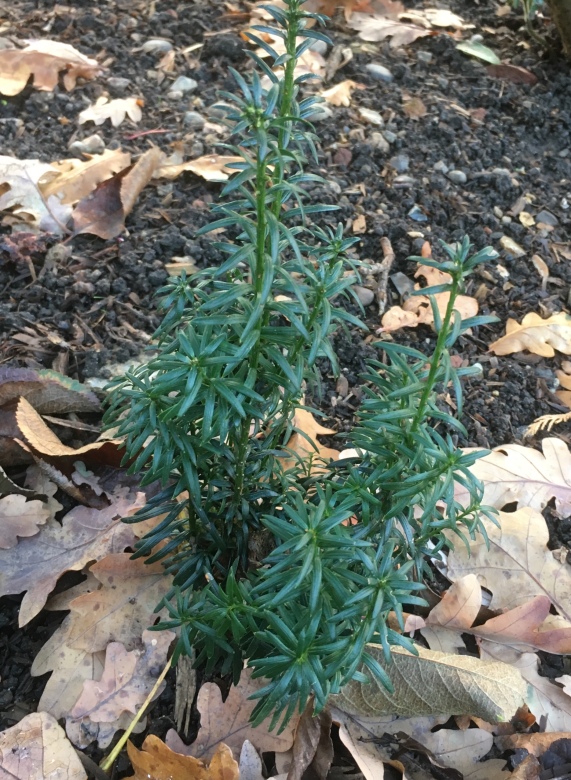 This young yew tree was given to me by the birds!  I can’t bring myself to pull it out and would love to find a corner of the garden where I can nurture it along into something significant.  Maybe I can start up my own wild hedgerow along the back fence.  I’ve got a few wild blackberries that need to be taken in hand.  Throw in a dog rose and some years of patient waiting and I could be onto something. 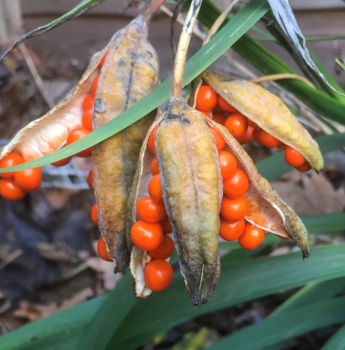 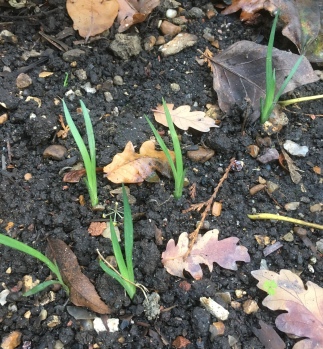 The back fence is already home to Iris foetidissima and these have helpfully self seeded very successfully.  The orange berries glow brightly through the gloom and a good colony of these in the dark corner will provide a much welcomed lift to the spirits through winter. 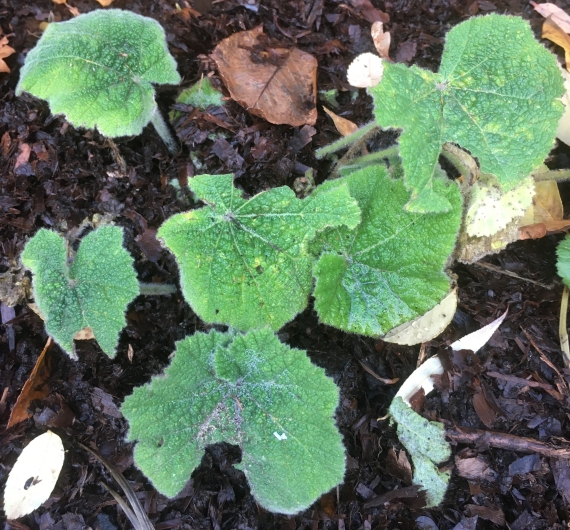 I collected some Hollyhock seeds to bring with me to the new garden and now the seeds from those plants are starting to colonise well.  I have had to take a few in hand as they managed to get themselves going some distance from the main site.  I never know what colours are going to appear which is part of the fun. 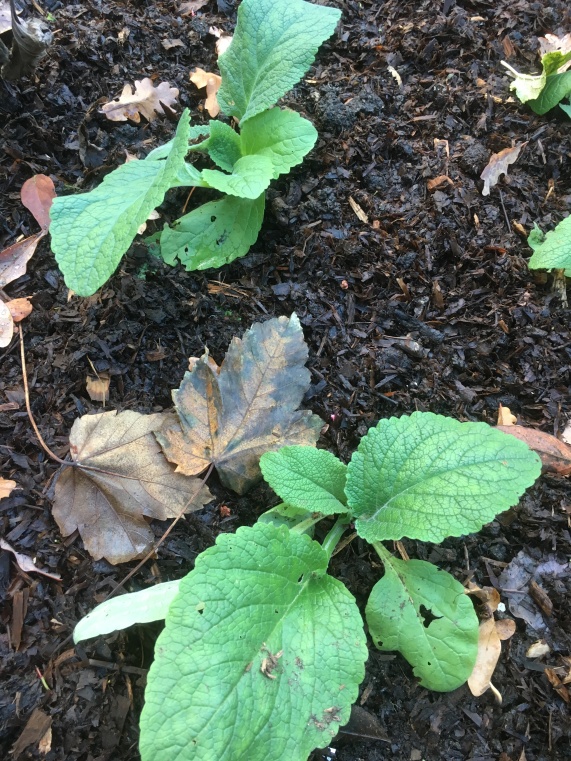 Another great self seeder is the foxglove.  I did not have any in the garden so I bought a packet of seeds and did some sowing around the end of August.  There was a good success rate and I have moved some out into the garden and left some to overwinter in the unheated potting shed.  I’m hoping this belt and braces approach will give me a reward.

The fireside keeps calling me but the garden won’t let go just yet!  Have a look at what everyone else is up to by visiting The Propagator’s blog – there’s no way Mr P will be putting his feet up just yet!

So Monty Don recently said  ‘Gardening is easy. Stick it in the ground the right way up and most plants will grow perfectly well.’ Which is essentially true but every now and then strange things happen: 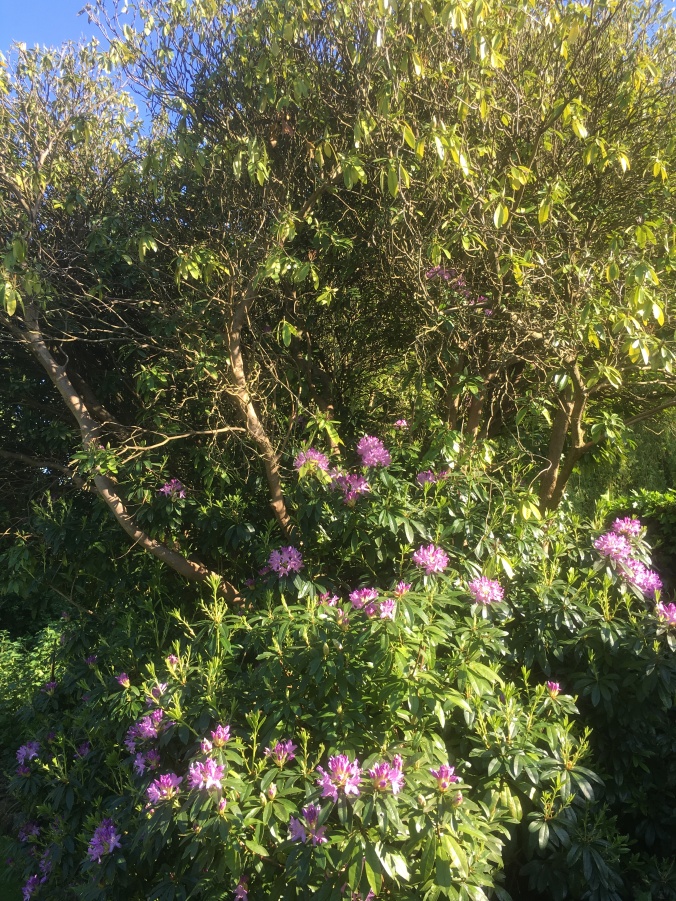 I think I know why my rhoddy looks like this.  It’s possible that the tree was planted soon after the house was built, which would make it about 100 years old.  I think it had been left to its own devices and being on a north facing border it had reached forward for some sun.  I think the previous owner then cut it back hard at the bottom to regain some of the lawn.  My evidence: when we moved in I discovered a large pile of wood stashed behind the foliage.  Since then the bottom of the tree has regenerated and this year has put out some fabulously healthy flowers and more luscious green leaves.  But the top of the tree struggles on with yellowing leaves and smaller and much later flowers.  My guess is the bottom is sapping the energy of the top.  So do I radically cut back the top, probably reducing the height by half – which feels like vandalism, but if it needs to be done….or do I lightly prune the top every year until the tree balances itself out again?  It has plenty of water and although north facing it does get early morning and late afternoon sun so I think the conditions are okay.  Any thoughts? 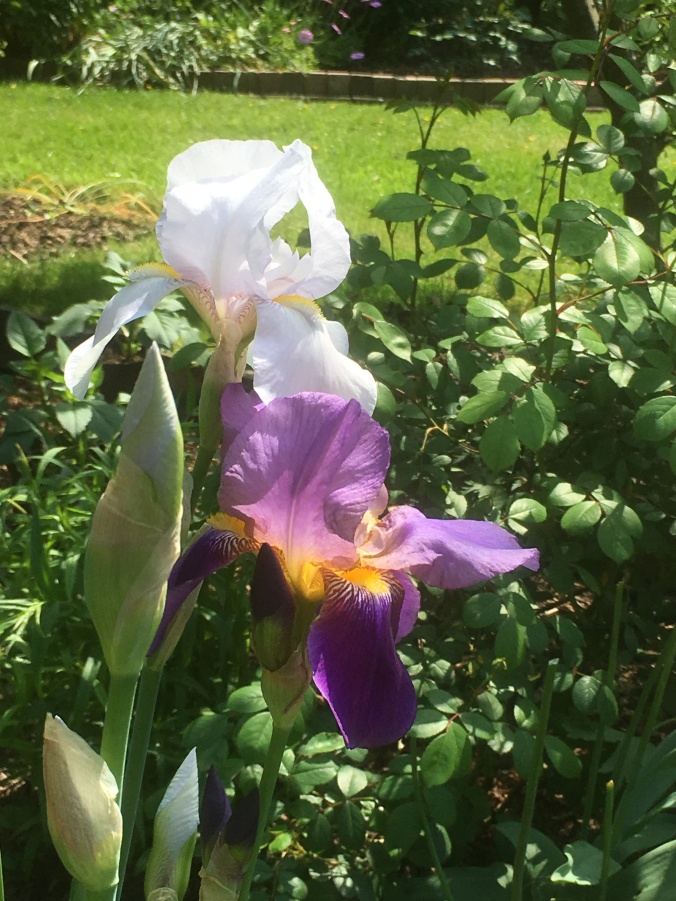 This beautiful iris came free, picked up from the allotment sharing bench.  I think it is  ‘White City’ and last year they were all the palest blue colour fading to white.  This year there is an interloper.  Now since it was a large clump divided from an even larger clump maybe the purple iris has been there all along and has only  just flowered. Or has it been cross pollinated?  Either way I am enjoying them both. 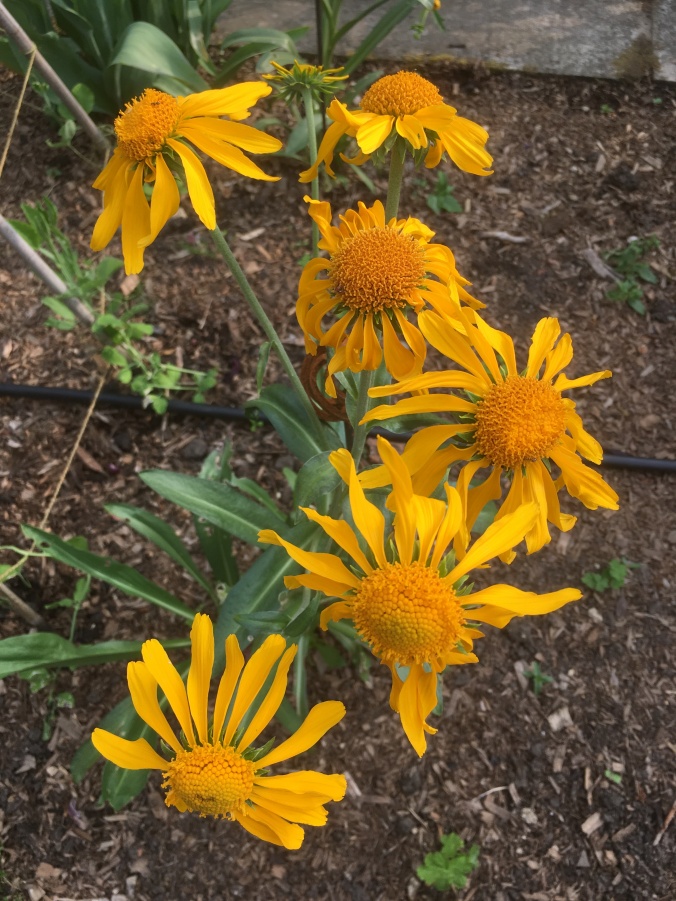 Is my Sneezeweed trying to tell me something?  I bought some last year with the aim of adding some late colour to the borders but it has been in flower since May.  Label says ‘Flowering period: late summer’.  My, the year is going fast! 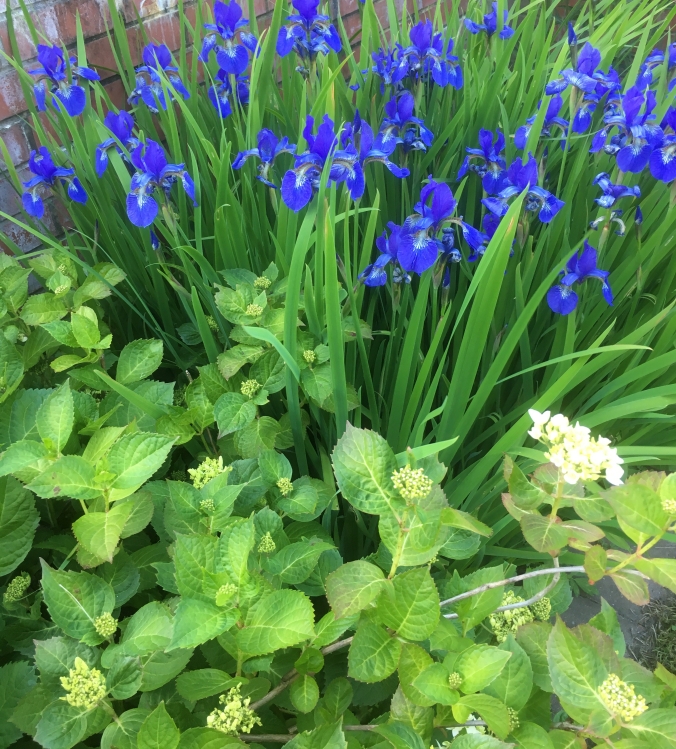 Back to some normal happenings.  These stunning Siberian irises came as several divisions from a friend’s collection.  This is their second year in the garden and they have multiplied amazingly, definitely a case of growing perfectly well. 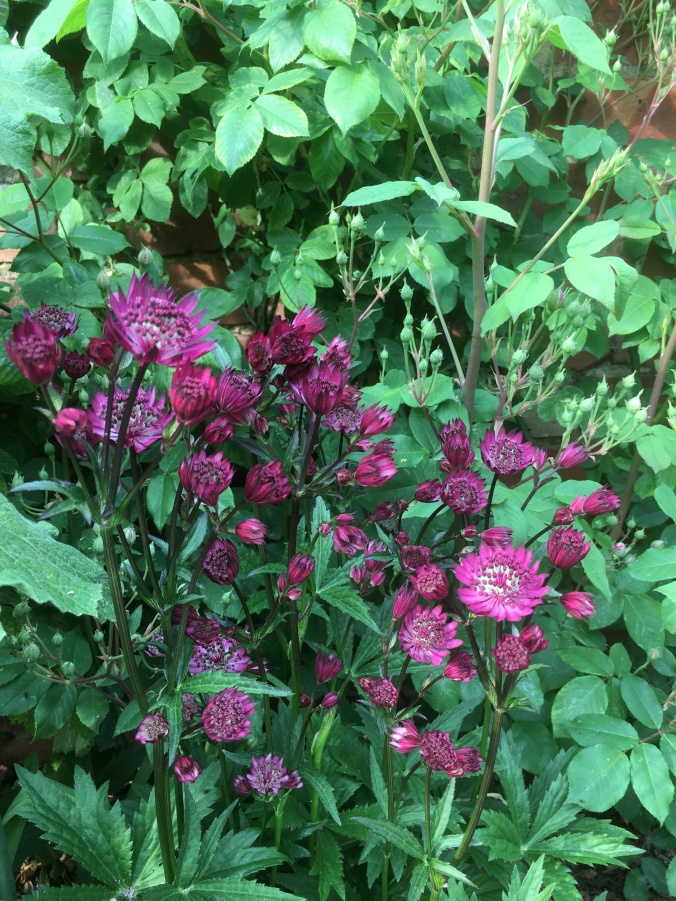 The equally successful Astrantia ‘Claret’.  I did try to grow some from seed but that didn’t happen so I happily bought some 9cm pots which have bulked up well in their second year.  The roses in bud behind are ‘Blush Noisette’ – so close to popping but not for this week! 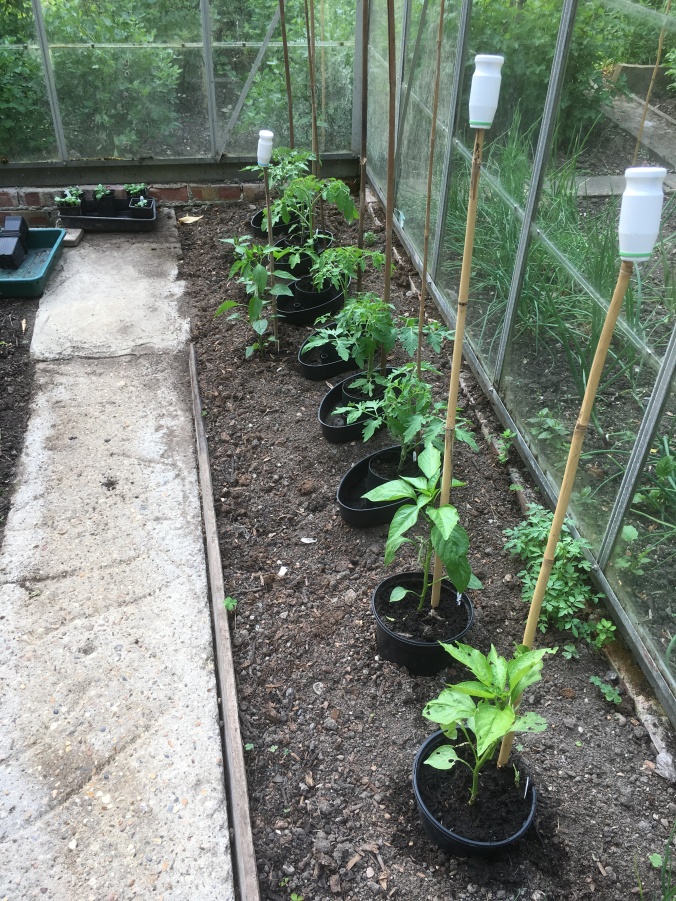 I must give a shout out to the growers at the Finchley Horticultural Society who also seem to have the knack of making gardening easy.  I decided to diversify my tomato growing this year.  Instead of 15 plants of one variety grown from seed I have six plants of three varieties bought at last week’s plant sale.  I’ve missed the roller coast ride of raising them from seed but I’m going to enjoy the variety: Marmonde, Golden Crown  and Alicante.  I was also tempted by some chilli plants and a couple of Romano peppers.  I’ve taken the plunge this year and planted them direct into the soil instead of in grow bags.  Let’s see what the greenhouse soil has got in it!  I have grown my own basil which I’ll be planting around the tomatoes.

There’s an extra gardening day again in the UK.  Will it be hot and sunny, hot and thundery or a wash out?  Let’s hope we can all find a way to enjoy the weekend whatever.  More gardening stories can be found at The Propagator’s blog.  The contributors also seem to be growing very easily.

This week’s six has a snow damage focus.  Last Sunday’s snow and frosts have taken their toll.  The ground has remained frozen and winter is here.  Let’s start with a carry over from last week. 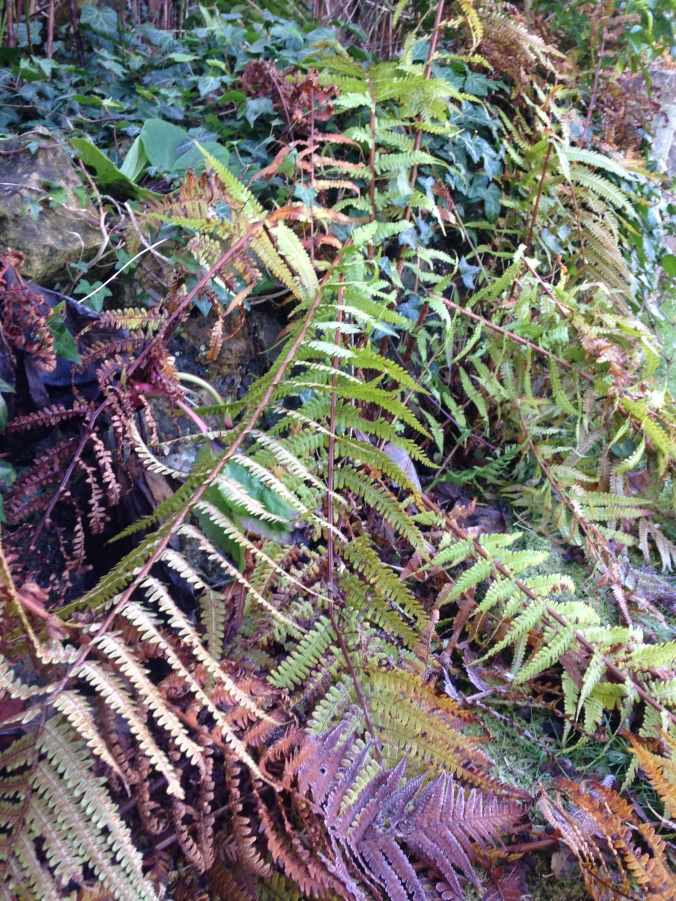 Here is the  missing picture of my bracken /fern for you to consider.  There are a number of these in the garden.  Are they Bracken of Fern I ask myself, this site might help  Fern or Bracken? It’s all in the pinnate .  Whatever they are, they are ready for the END_OF_DOCUMENT_TOKEN_TO_BE_REPLACED