I’m still whirling round the garden like a dervish. So much weeding but also the first of the penstemons were cut back.  P. ‘Garnet’ was putting on new growth everywhere and it seemed rather cruel to cut most of it off but that’s what I did.  The other penstemons are only just putting on new growth from the ground so I’m leaving them another week or so.  I’ve also began staking the perennials and continue to tie in the clematis and climbing roses.  Seeds are being sown but I’ve given hope of seeing a dahlia or lupin seed germinate.  They have spurned the sunny windowsill in the kitchen and the increasingly hot greenhouse. Time to admit defeat.  However the tulips are coming along nicely.

The real ‘White Triumphator’ tulips have shown up this week and have added a beautifully fresh note to the border. 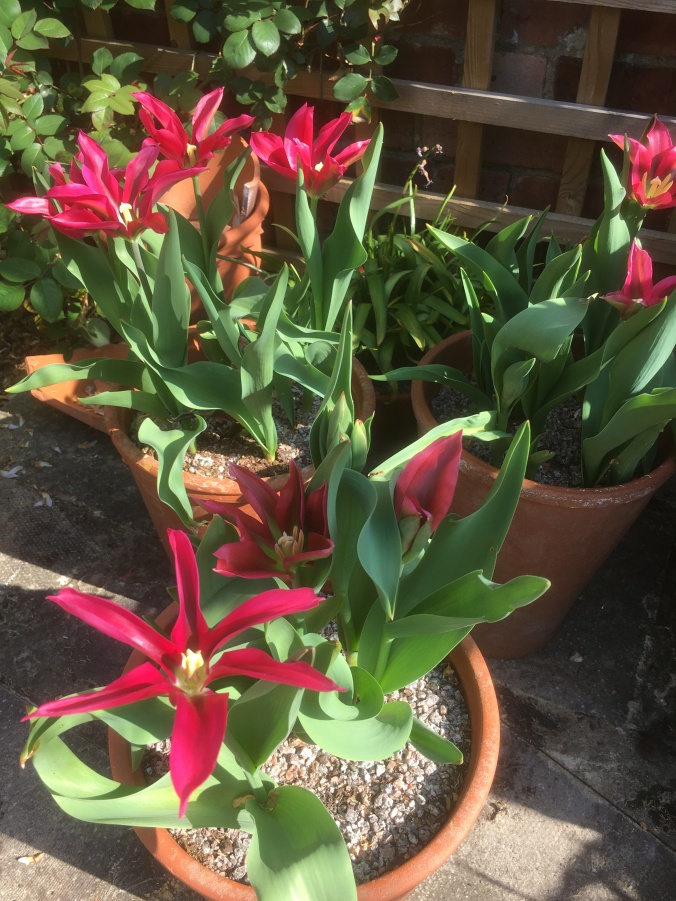 Apologies to HeyJude, last week I commented that I didn’t have any tulips on pots.  How could I have forgotten these?  They are ‘Doll’s Minuet’ and I must thank another SOSer Joshua for putting me onto them.  They are short stemmed so I put them in pots but I may be tempted to try to  move them to the borders.

This collection has caused me much consternation this week, as, I seem to remember, it did last year.  But today I found the original order.  This planting mix is  ‘Ronaldo’, ‘Spring Green’ and  ‘Negrita’.  Ronaldo hasn’t shown so far and I don’t think he ever turned up last year.  I may just order some ‘Ronaldo’ on their own to see what they should look like! 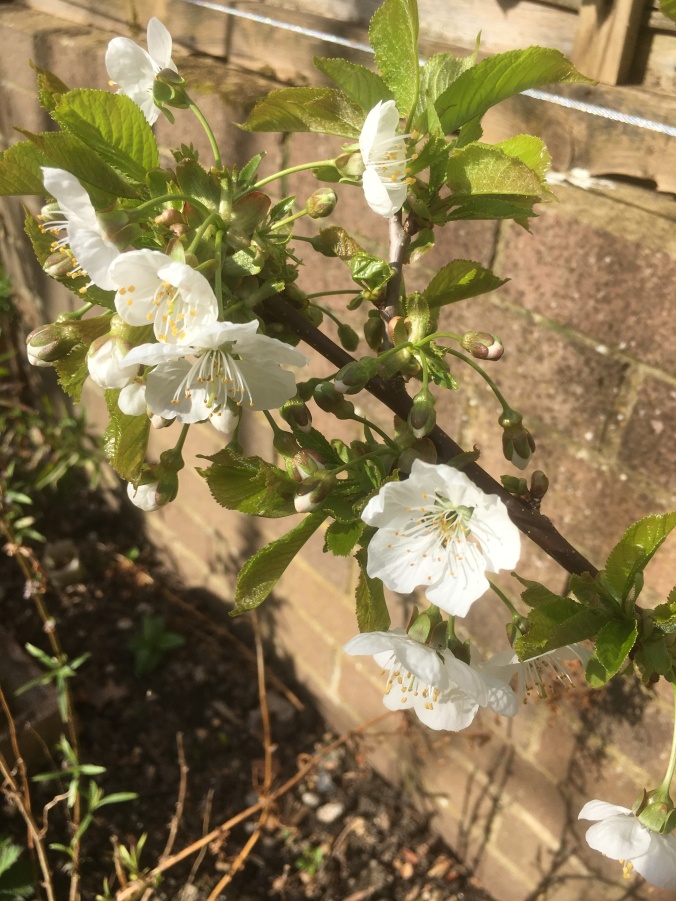 In all the tulip excitement I must not forget to mention the first cherry blossom from a tree I planted out last year.  I am fan training it against the south facing wall  and, as usual, have high hopes.  The blossom is a nod in the right direction.  But even more exciting is the fact that in the search for the tulip order I found the cherry tree order and I can confidently tell you that this is a self pollinating Stella cherry grafted on to colt rootstock  – the best choice for fan training.  I’m feeling pretty good now.

It’s quite hard to show these grasses off to their best but I hope those white seeds heads give some idea of how beautifully they are balanced above the fuller grasses below.  These are melica altisssima ‘Alba’, new to the garden last year and filling out very well.

A promise of things to come, the flower heads of camassia.  These bulbs were planted last autumn and I’m afraid I will be hunting down more records to find it which variety I finally decided on.  Perhaps by the time it flowers I will have found the answer.

You would have thought that staying at home would have given me the perfect opportunity to sort all this out in advance.  But while the sun shines the garden calls.  More seed sowing to be done and the maincrop potatoes to be planted this weekend.  To find what other SOSers will be up to just go along to The Propagator’s blog.  All will be revealed.

24 thoughts on “Six on Saturday: Stand back, tulips coming through”