I have not ventured out in the garden too much lately but one day this week there was a gap in the downpours and I managed to do some work. I have a very sodden garden and I was squelching around in the borders. I managed to divide some day lillies and a knautia. I relocated some sanguisorba ‘Tanna’ that had not performed at all well and planted ten of the hundred or so bulbs that I have left to plant. The borders are slipping into winter dormancy and I thought there would not be much to show for this week’s six. But it is surprising what can be found. Here they are. 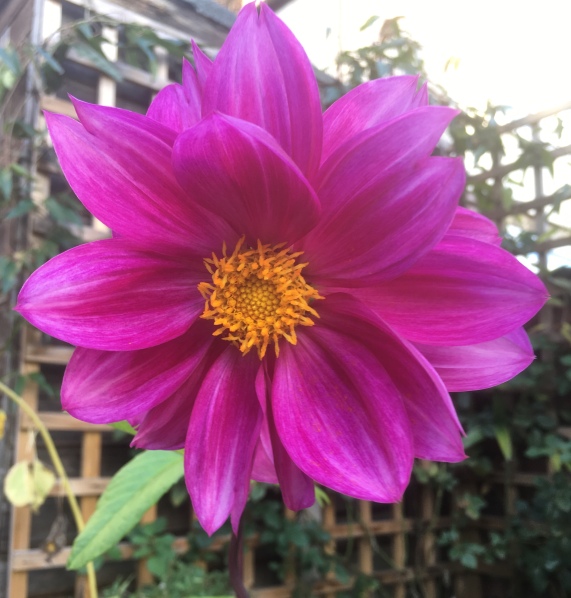 By today this dahlia had finally opened up.   Do I have the slowest dahlias in the UK?  I’m hoping the first frosts are a few weeks off.  To be fair, this dahlia was dug up and replanted in a pot after a slug attack had left it in tatters so I should be proud of its resilience. 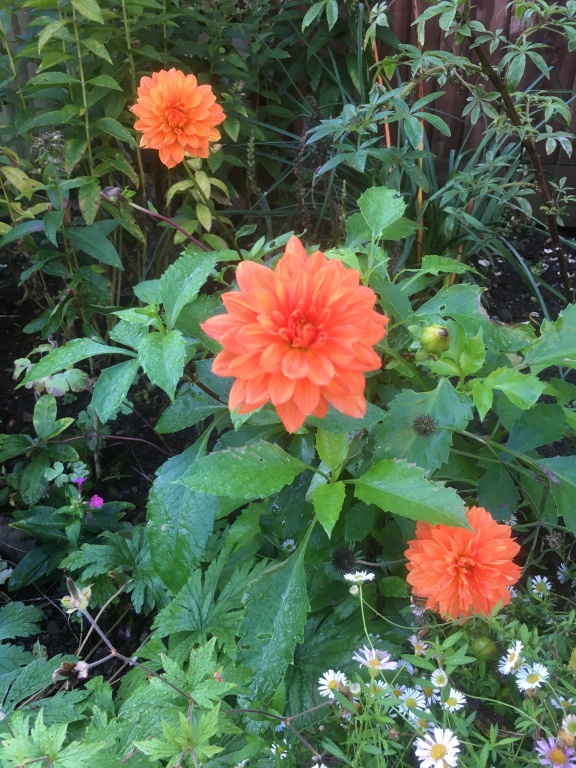 The Orange Cushion dahlias that I am hoping to propagate from seed have put out a new flush of flowers and I do much prefer this size of dahlia flowers.  Collecting seed has not been possible so far as the seed heads are a soggy mess.  Dahlia lovers – should I be cutting the heads off and bringing them inside to dry?  I have done this with my agapanthus and they did deliver some lovely black seed. 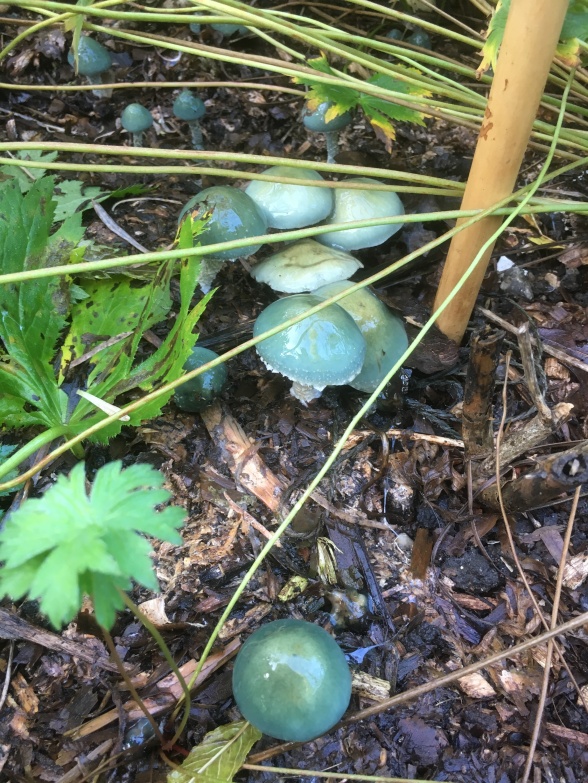 These beautifully coloured mushrooms are now an annual feature of the garden.  I have quite a colony of them this year.  I think they come with the mulch that I buy each year and I am very happy to have them. 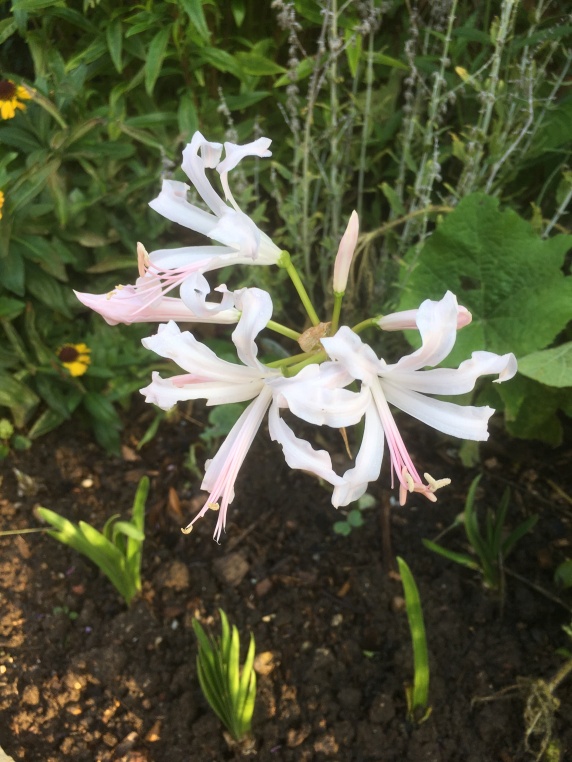 This is my one flowering nerine for the year. It is  bowdenii ‘Ostara’. I planted about ten in April 2018.  I am having another go and as a result of special offer – end of season, we have so many we are giving them away – I now have 30 more.  Total cost £5.  Nothing ventured, nothing gained. I’ve some in a pot now, hoping that they will be my insurance. 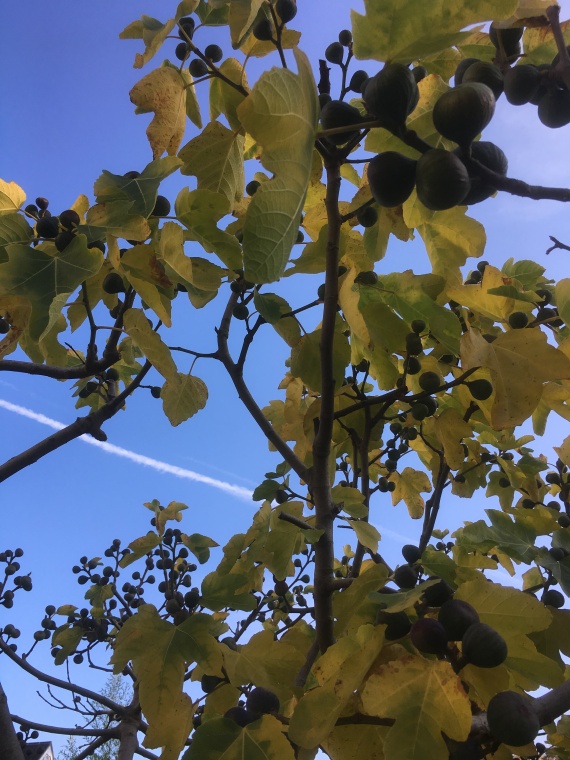 The fig leaves have yellowed so much more over the week.  Sadly it is unlikely that the fruit that remains will ripen and I will have to pick them all off soon.  On of my least favourite garden jobs. 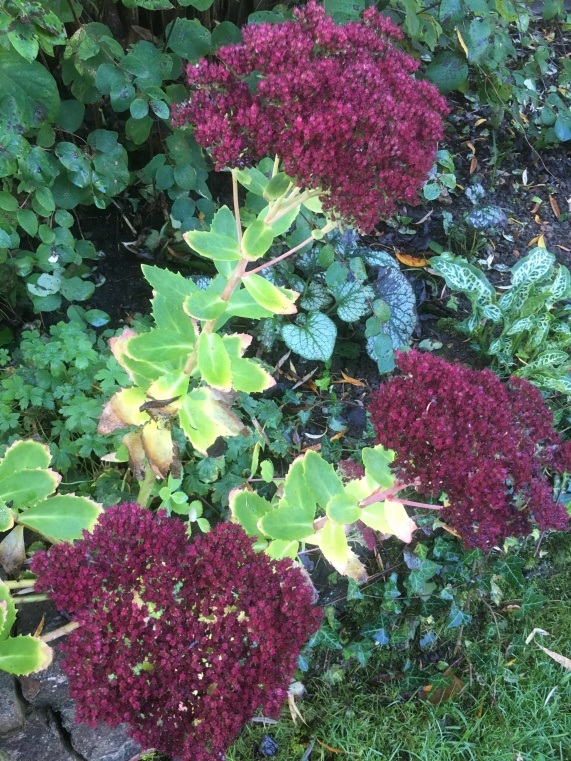 The hylotelephium spectabile that I mentioned a few weeks ago have darkened to a good deep red.  I did move a few round in the front garden and have some spare plants to over-winter in pots.  As the garden matures my collection of plants in pots increases.  The self seeding geraniums and alchemillia mollis are growing in number but there are always gaps to be filled and they will be put to good use next year.

I take my hat off to Mr P who manages this herd of SOSers.  I had a busy week last week and didn’t get to read many of my usual SOS favourites.  I will do better this weekend – after I finish planting the allium and daffodil bulbs!

11 thoughts on “Six On Saturday: Delightful dahlias cheer up the garden”