I’ve been feeling the garden needs a bit of a shake up.  This week was a staycation and it provided the opportunity to visit a few places and take in some garden inspiration.  Dan Pearson Studio has planted up a public park at Handyside Gardens, Kings Cross. Plenty of grasses of course but I spotted some wild strawberries used as underplanting. I’ve made a note for the future. In Oxford I laid eyes on a beautiful blue plant that is proving hard to id. Your thoughts are most welcome. On a very hot bank holiday Monday we visited the Ulting Wick open day.  I went to view the dahlias.  I know they are the one of the best flowers for late summer but I’ve not mastered the art of placing them in my garden.  It just doesn’t seem to be dahlia friendly.  I was also in search of some orange inspiration to balance out all my magenta colours.  I struck lucky.

Dahlia ‘Orange Cushion’.  Only one available so I snapped it up and hope to be able to propagate it next year.  The dahlias at Ulting Wick are very impressive, I won’t be matching them for scale of planting but I’ve made a start.  I’ve come to accept dahlias and even those with bronze foliage. I can see how to  use it in the mix.  I have great plans for next year. 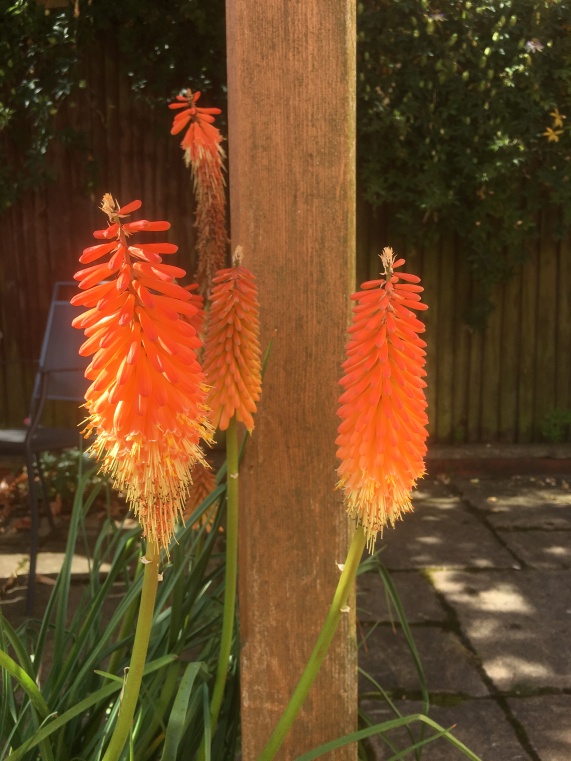 Some kniphofias, divisions from the Ulting Wick stock and sold by the bag full.  This bag had some new spires so I should get a few weeks at least out them. 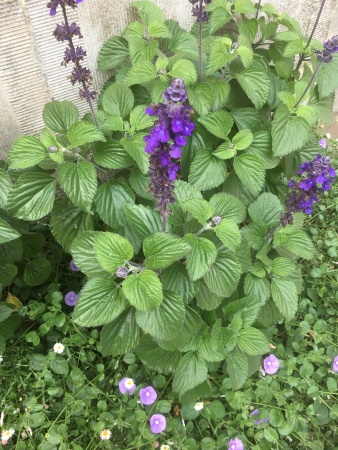 All those oranges seemed to call out for a blue and there was a handy pot of salvia pratensis.  On the right is the mystery plant spotted in Oxford.  I thought it was also a salvia but does anyone have any ideas? 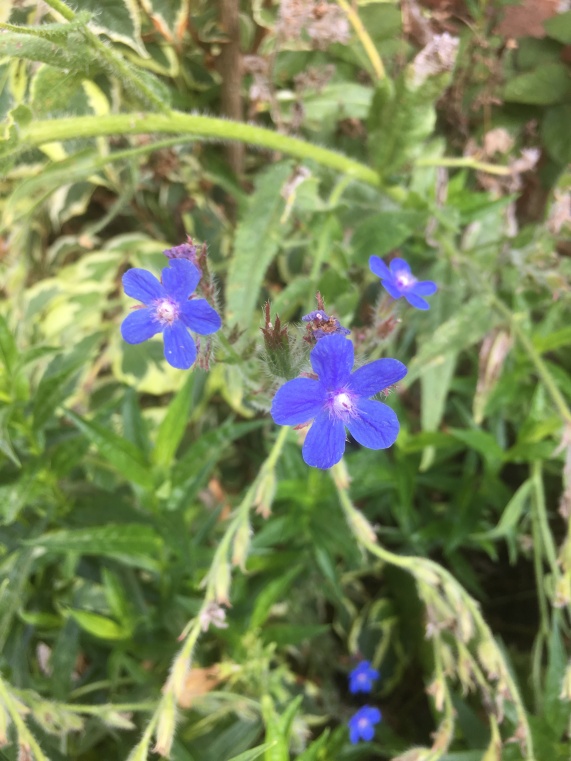 With my head full of thoughts for next year I decided that things have to move round in the garden,  This anchusa azurea has been flowering away at the back of the border for a couple of years now and it is so often overlooked.  I need to find a space for it show off in.  I thought it was ‘Loddon Anna’ with a slightly less intense blue than ‘Loddon Royalist’ but I couldn’t find any images for ‘Loddon Anna’.  Did I make it up?

Many of the gardens I saw this week had good shows of hylotelephium spectabile.  Which is simply known as the ice plant in this house.  I’ve inherited these and have let them do their own thing which often involves collapsing through lack of water.  Now I’ve seen them put together with other planting I am going to consolidate the groups I have into one display…somewhere in the garden, for next year!

Staying put and doing both moving and shaking is pennisetum villosum.  The very first flower spike.  I need a few more to complete the picture but you get the idea.  Floaty pennistetum with floaty gaura.  I never thought I would have grasses in the garden either but I have been won over here too.

I soaked up ideas from gardens visited over the years but also from the many wonderful posts from fellow SOSers.  Too many to name check but as always I recommend you take a look at the links on Mr P’s  site.  Thank you to the sixers who have inspired me.  You have widened my horizons and added to my garden.  There, that’s enough sucking up, I have some planting to do.

20 thoughts on “Six On Saturday: Movers and Shakers”